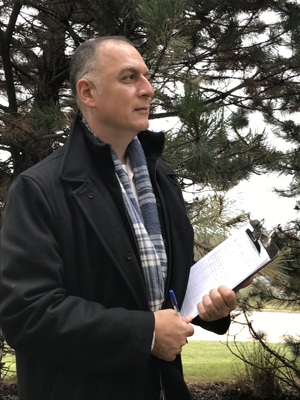 I was born in the Edgewater neighborhood of Chicago.  Like many immigrant families, we left Chicago for Skokie for the school system.  I went to Sharp Corner grade school, Old Orchard Junior High, Niles North High School (Go Vikings!), and the University of Illinois.  Raised by a single mother—I worked full-time at Dominicks to put myself through college to graduate without debt.

I interned for US Senator Paul Simon and left Skokie for Little Rock, Arkansas in October of 1991 to work for Governor Bill Clinton.  I didn’t wait for an interview‐I showed up, at the front door.  Healthcare and the economy were the big issues back then.

I worked in the White House as the Director of Special Projects, and earned my MBA from George Mason University of Virginia while attending classes at night.  My Federal service focused on infrastructure, economic growth, healthcare reform, and the global economy.  I was proud to be a part of the Administration overseeing the longest economic expansion in US history.

This led me to Barack Obama.  We met in Springfield in January of 2003, and not long after I was helping him in his run for US Senate.  In February of 2007, he announced that he was a candidate for President and he asked me to manage the national headquarters of his Presidential campaign.  The Affordable Care Act passed, civil rights were enforced, and progress was made in our economy.

Along the way I met and married Thi, the love of my life.  We live in Skokie, next door to the house I grew up in (I’ve been cutting the same bushes that divide the property line my whole life!).  Thi is from Vietnam—and like me, is grateful to live in the USA.